This article explains why Campaign Life Coalition holds that it is absolutely appropriate, accurate and truthful, based on the evidence, to describe COVID vaccine passports and medical segregation as a “Nazi-style” system.

The initial argument offered by those who might object to “Nazi-style” being utilized as a descriptor in this context goes as follows... Since there’s no extermination of unvaccinated Canadians taking place, the comparison should never be drawn! After all, Hitler exterminated millions of Jews, so the “mere” suspension of Canadians’ civil rights doesn’t rise anywhere near the level of Hitler’s gas chambers.

However, such an argument misses the point entirely.

We’re not making a comparison to the gas chamber killings that took place towards the latter years of Nazi rule. Instead, we’re comparing to the social ostracization and exclusion from economic life that Jews suffered during the early years of Nazism, before the death camps.

Those similarities are plentiful and irrefutable. Millions of unvaccinated Canadians have now suffered ostracization and not been allowed to participate in society.

People forget that Hitler did not begin with gas chambers and people ovens. He ended with that. Starting in 1933, the Nazis began implementing rules and laws designed to bring about social ostracization and to prevent Jews from participating in economic life.  Mass extermination did not begin until 1941-1942, some eight to nine years later.

In 1933 when Jews “merely” saw some of their rights begin to be curtailed, Hitler’s original goal was not mass murder.  Rather, the Nazis hoped to force Jews to emigrate from Germany, and they wanted to exclude them from public life. And of course, there was a political goal: the campaign of discrimination and vilification gave Hitler a perfect scapegoat on which to pin all the woes of the nation. Every aspiring dictator needs a scapegoat in order to focus the hatred of the people. This allows him to be seen as a saviour from their common enemy, and then, to consolidate power.

Let’s explore the many striking parallels...

In the 1930s, Jews were told they could no longer enter pubs, cafes or cinemas with other Germans. Nor sporting events, swimming pools, libraries and other public venues. Restrictions were placed on the number of Jews who were permitted to attend university.

Throughout Canada, unvaccinated Canadians were not allowed to enter restaurants, cinemas, sporting events, swimming pools and other public venues. Unvaccinated students were denied enrolment in Canadian universities, and de-enrolled even mid-way through their programs.

Exclusion from the public service

In 1933, Hitler passed the "Law for the Restoration of the Professional Civil Service" which banned Jews from being employed by the government. It resulted in all Jewish public servants being fired.

In Canada, Justin Trudeau’s federal vaccine mandate resulted in the firing (or suspension without pay) of thousands of unvaccinated Canadians and still today, outlaws the hiring of the vaccine-free. To increase their pain, the Trudeau government announced that these fired workers would be ineligible for unemployment insurance. Presumably, poverty, starvation and losing your home are desirable outcomes for the unvaxxed in Trudeau’s mind.

At the provincial level, governments, including Ontario, also required the firing (or suspension without pay) of thousands of unvaccinated health care workers, including nurses and doctors. Even today, although the Ontario government no longer “requires” the firing of health care workers, it has publicly authorized hospitals to continue this unconstitutional policy of segregation and apartheid.

On December 17, 2021, the New Brunswick government authorized grocery stores to begin denying entry to unvaccinated citizens. Just take that in for a moment. The government encouraged stores to deny food to the unvaxxed. It does not matter that the decree was later repealed owing to public backlash. Restricting access to groceries for the unvaxxed was on the government’s mind and was deemed perfectly acceptable.

Is there a parallel to this decree in the Nazis’ treatment of Jews? Yes. On July 4, 1940, Hitler’s chief propagandist, Joseph Goebbels, decreed  that Jews in Berlin could only shop for groceries between 4pm to 5pm, so that “separation could be carried out as cleanly as possible”.

In Germany, it was not only the national and state governments that passed anti-Jewish decrees. Regional and municipal governments, of their own initiative, added hundreds of additional discriminatory decrees and laws. Is there a parallel to that in Canada’s COVID dictatorship?

Municipal hockey arenas across Ontario have used a vaccine passport to deny unvaccinated parents and children over age 12 entry to their facilities, thus turning citizens into outcasts. We could carry on listing examples of discrimination based on vaccine status, but you get the point.

Did you know that the Nazis also had a “health passport” called the Gesundheitspass? This was used to determine employability or limit travel based on an individual’s medical history, and targeted Jews. If a person had a particular disease or was deemed prone to getting a particular illness, he or she was restricted much as unvaccinated people are today.

The Nazi regime launched a "public health" crisis accusing the Jews of being “spreaders of disease” among the German people, for example, of tuberculosis and typhus. 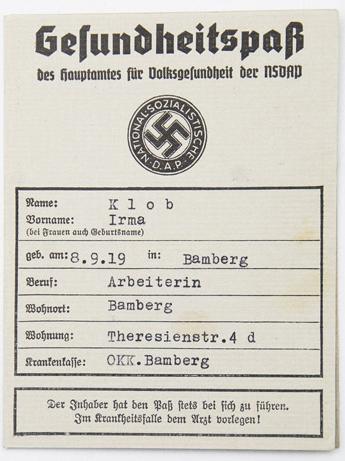 Today, unvaccinated Canadians are still banned from boarding an airplane, train, or boat anywhere in the country. The federal government claims claim that vaccine-free Canadians will spread disease to everyone else and that they represent a grave public health risk.

This should make every Canadian feel quite uncomfortable with the fact that our provincial governments, including Doug Ford's Ontario government, has used a vaccine passport system to segregate citizens in an apartheid system very similar to that used by the Nazis.

The structural systems of segregation in Nazi Germany were accompanied by propaganda campaigns to vilify Jews and foment public hatred against them. This fomentation was carried out by the government in concert with the press, the latter which strongly supported the discriminatory Nazi policies.

This is another parallel that simply cannot be denied: the intense vilification and hatred fomented against unvaccinated Canadians.

In the 1930’s Jews were labelled as “disease spreaders”. They were blamed for bringing illness and death to the German people, and consequently, for heaping a financial burden on the German healthcare system. It was in the daily newspapers. Posters were even circulated that depicted rats crawling behind Jews, so as to associate them with disease and being “unclean”.

On August 26, 2021 Canada’s largest circulation newspaper, the Toronto Star, published hateful, venom-filled headlines against unvaccinated Canadians in a front page article. One headline read, “I have no empathy left for the willfully unvaccinated. Let them die.”

Another headline read, “Unvaccinated patients do not deserve ICU”, an allusion to them being a burden on the healthcare system, and a sort of death wish. 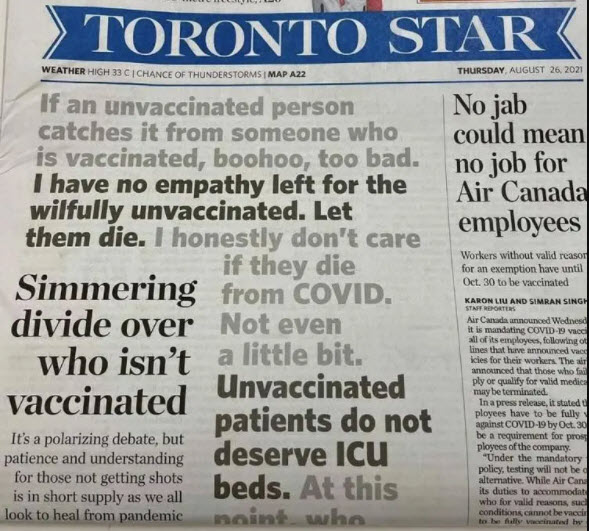 Even Canada's top legislator, Prime Minister Justin Trudeau, has whipped up intolerance and hate towards unvaccinated citizens. During the 2021 federal election, in reference to the unvaccinated, Trudeau asked during a french-language tv interview: "Do we tolerate these people?".

This shocking bit of hate speech is straight out of the Nazi playbook. In Germany, they not only vilifiied Jews as "disease spreaders" but also demonized them as the principle source of moral decline in society. Likewise Trudeau demonized the unvaccinated, ascribing to them a character of total depravity, labelling them science deniers, "misogynists" and "racists". Translated from the Prime Minister's french-language interview:

“We all know people who are deciding whether or not they are willing to get vaccinated, and we will do our very best to try to convince them. However, there is still a part of the population (that) is fiercely against it."

“They don’t believe in science. They're often misogynists, also often racists. It’s a very small group of people, but they take up space."

“This leads us, as a leader and as a country, to make a choice: Do we tolerate these people?" (emphasis added)

Adolf Hitler eventually asked the same question about Europe's Jews. We know how he answered it.

Any reasonable person looking at the evidence has to recognize that the vaccine passport system and other forms of discrimination against unvaccinated Canadians can be justifiably described as a “Nazi-style” system of segregation.  The similarities are too numerous and striking to deny.

By describing the segregation of Canadians based on vaccine status as a “Nazi-style” system of discrimination does not mean that we’re predicting that vaccine-free Canadians will end up in death camps.  We are not, but it’s not necessary for a genocide to happen, nor even to be foreseeable, for us to be justified in describing the current system of COVID tyranny as “Nazi-style” discrimination.

The description is accurate and the supporting evidence is overwhelming. If the jackboot fits, our political overlords must wear it.